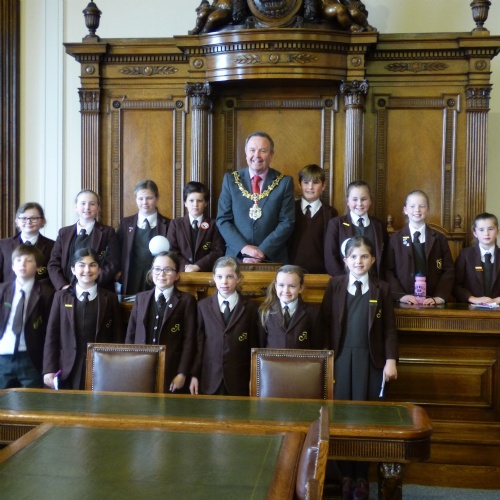 On the 29th March 2017, a group of fourteen year fives and sixes went to Wallasey Town Hall to debate in the Chambers. First, the mayor gave us a short tour of the building and told us about the history. We also got the chance to go into the mayor’s parlour and see his special mace used for real council debates.

After about 25 minutes of looking around, we went into the chambers to start our debate. The motion for our debate was “This house believes that TV is a bad influence” and our chair person was JH (Y5). We had two teams; the proposition and the opposition. One by one, the speakers of each team delivered their speeches loudly and clearly. The mayor also listened to our speeches and the debate as a whole. At the end of the debate, we all voted for what we believed was true and… the opposition won! The final score ended up being 7-6. After that, we had some snacks and the mayor told us more about the chambers.

Overall, I think it’s safe to say that everybody, whether they were speakers, time keepers, the chair or even someone that asks questions and supports their team, had an amazing time. Thank you to Mrs McGregor for organising the trip and holding the debate club itself! Also thank you to Mrs K. and Mrs Mollard for coming on the trip with us.