Don’t forget to follow us on Twitter @avalonschwirral as this will be the most immediate way of seeing the photos. If you wish, you can turn on tweet notifications so you will be alerted when photos and news have been posted. In the evenings, we will endeavour to upload more photos and videos to this page.

A very early start at Manchester ariport was not helped by "Storm Ciara". However, we were not delayed and arrived in Turin in good time. The coach ride was easy and it was a real treat when Claviere came into view. The children settled into their rooms before an exploratory walk into the small but very pretty village. Claviere is the oldest ski resort in Italy and many of the building are historic. We walked down to where our lessons are going to be in the morning and the snow looked very good indeed. We are due some relatively significant snow this week too.

Dinner was a pasta carbonara followed by turkey escolape and carrots. The dessert was sensational and was described as an apricot marmalade tart  so good.

The children have got all their boots and skis sorted and are ready for their morning skiing. Some tired faces already but we're looking forward to tomorrow.

The beginner groups with Lawrence (the hotel manager’s son who works for the Scuola di Sci) and Alby (Alberto) got to grips with the “magic carpet” and were enjoying their first attempts on snow. Some of the children realised it was very different to the dry slope that they had practised on. Nevertheless, all children were up and skiing by the end of the morning. The top group (group c with Francesca) went straight to the top of the mountain (all 2300m of it!) before coming down at some speed. All of the children were amazing today.

In the afternoon, group B (Lawrence’s group) went on the 4 -person chair lift for the first time which was an amazing experience. They all conquered it – well done all! Alby’s group did some more practice with the beginners and he’s hoping to progress them up the mountain tomorrow.

Pasta Bolognese for dinner which went down amazingly. It is a pasta starter every evening, which is a real delight to many of the children, followed by a meat with vegetables. They are all eating well.

The evening was finished with a chaotic but very funny game of articulate and they are al now well tucked up in bed.

More skiing tomorrow and it is snowing at the moment. It’s disco time tomorrow night (we have had to rearrange) and the children are very excited – already picking out their clothes!

We’ll send some photos tomorrow but in the meantime, you can see the twitter page here https://twitter.com/AvalonSchWirral 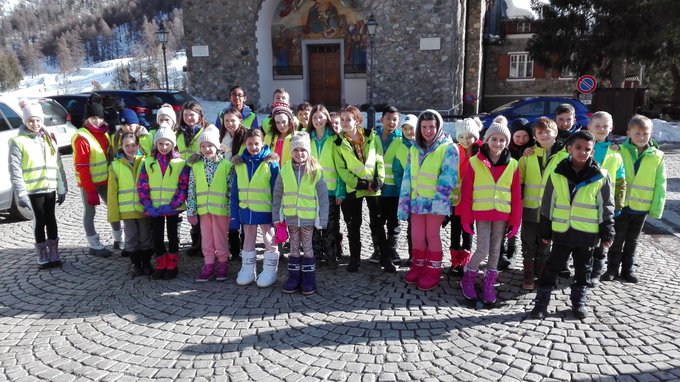